HILLARY VS. DONALD: IT IS ALL ABOUT GENDER

Of all the candidates running for the presidency of USA, Julie Stein would be my choice simply because she seems to be the most intelligent. She is also pro-peace which is a big thing for me personally. If things would be in my way, Julie Stein and Bernie Sanders would debating and running against each other. But the reality is that there are two others. 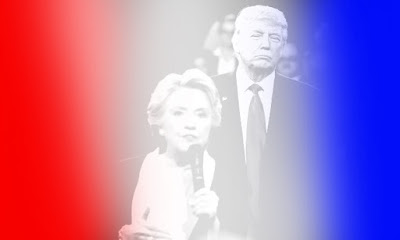 Donald Trump is very likely a bad ass. A guy who built billion dollar industry in a city ruled by the US mafia can not be a marsh mellow. More than likely he is tough, rude, brutal and ice cold when it comes to the business. I don't know the man personally but I guess that he is very much like most of the men at his age group: a pig, sexist, womanizer and so on. I don't know. Most likely he is talking trash about the women in general when he is drunk. Just like most men of his age. He might be a bully, I don't know.

Donald may be xenophobic bastard, He might be anti-immigration and anti-islamist. That would be no big surprise after his speeches.

Then we have Hillary. What do we know about her and those around her? Thanks to Wikileaks, a lot. Thanks to the actions of US government during her tenure as a secretary of state. Unlike Trump, of whom we still know less than we think, we know what Hillary has done in office and outside of it.

We do know that she headed the effort to destroy Muammar Gaddafi, a bad man no doubt BUT a head of state of another country, without declaring a war to that nation. Now, that is a crime according to the international law. Granted, the bombing of Libya was sanctioned by UN but only after it had already began by Nato, which is under US command. And what was her reaction when she was told about the death of Gaddafi, another humanbeing? Right.

I wonder what Hillary supporters would say if they had a video where Trump is so happy when he is told that someone he does not like has been murdered? Right.

We know that Hillary was arming both ISIS and Al Qaida/Al Nusra/Free Syrian Army (as of 2016).

We know she was very instrumental at arming Al Qaida while those guys along with ISIS were chopping heads in Syria.

We know that she was contemplating an drone strike to kill Wikileaks founder Julian Assange while she was secretary of state. That in itself would have been a crime according to any law. As her backround is in Law, she must have known it but still...

We know democratic party stole the primary from Bernie Sanders by any means possible including rigging the ballot. This is not done without the candidate knowing it in reality.

We know that she was a key person in starting the Syrian war.

We know she was instrumental in sending sarin poison gas to the so-called rebels in Libya and Syria. Sarin is one of the most potent combat poison gasses around. And she made the descicion to make it available to Al Qaida and ISIS, who were and are the "opposition" and "rebels" in Syria and were in Libya.

We could go on for hours, literally, exposing more her more than dubious dealings, deals, policies, businesses, Clinton Foundation stuff etc. but it does not matter. We could talk about all those wars she has been involved in, all those bombings, killings of thousands of civilians but it makes no difference. No matter what she has done, no matter how destructive and terrible and how bad her policies have been, people still support her. They want her to be the president.

It does not matter that the Wall Street banks, Big business, George Soros, neoconservatives, military industrial complex and others are in her corner, people still want her to be the president. And there is only one real reason for it: gender.

Think if Donald Trump had been organizing the selling of weapons to ISIS and Al Qaida? He would be in jail right now. You think Trump would be walking around as a free man if he had been making sure that jihadist terrorists can get military poison gas into their hands? Of course not. But she is.

When it comes down to it, no matter what everybody says or what they pretend to represent, it all comes down to this one thing: gender.

Hillary supporters are upset when Trump has been grabbing buttocks but they don't care when Hillary makes it possible for terrorist to kill thousands. Hillary supporters are mad when Trump talks trash about women but it is just fine when Hillary jokes about murder of Gaddafi. Why? Because Hillary is a woman. It is okay for a woman to support terrorists, get foreign leaders killed and laugh about it.

Those who want Hillary to be the next president do not care what ever murderous terrorist policies she was orchestrating as a secretary of state. They don't care that she enjoys herself big time when she is told that another humanbeing has been murdered. Why? Why it is okay for her to be happy when people get killed? Why it is all right for her to arm terrorists with poison gas? There is only one reason: she is a woman.

That is all. No reason. No intellectual arguments. No policies. No reality, nothing. Just one thing. Gender.

It is all about gender. Nothing else.