European refugee crisis was not an accident nor it was a unstoppable event out of control. Recent manouvers of Turkey confrims that. EU pours billions of euros to Turkey for the "management of refugee crisis". In reality, the refugees are just a veil which gives the Nato a fake reason to compensate Turkey for the financial losses caused by the stoppage of the trading of ISIS oil and loss of russian business, such as the loss of russian tourists worth of hundreds of millions a year.

Ukranian refugee crisis began in 2014 when that country was de-stabilized and plunged into chaos. Some 2 million refugees left the country, but that did not matter much in EU or in USA, or in any refugee organisation. Finland got couple hundred, EU few thousand and Russia more than one million. But that was not a refugee crisis at all in the west.

The refugee crisis in Irak began in 2003. Millions fled the country. Finland took few thousand in the following years. For the next 12 years the Iraki refugee situation was no problem for the EU and the West. It was not that big problem in the media either.

The refugee crisis in Afganistan began in 1979. Some three million afgans fled the country and millions have fled since then. For 36 years the afgan refugee crisis was no problem for EU or the West, despite the fact that it was this crisis which spawned the taleban movement in the religious madras schools in Pakistani side of the border.

Syrian refugee crisis began in 2011 with hundreds of thousands fleeing for their lives. That was no problem for the West, EU or Finland at all. It remained as a non problem for the next four years. Finland received staggering 785 refugees from Syria. At the same time 755 albanians showed up as refugees too.

All this changed suddenly in 2015. What happened? Why the sudden refugee tsunami came in 2015?

It all comes very clear when we look at the political situation in EU at the very beginning of 2015.

EU-critical parties were gaining popularity across the union. In Britain UKIP, in France Marie le Pens party, in Finland True finns (who would betray their voters once they got into the government)  and in Sweden the Swede democrats were all gaining more and more support and voters despit the attempts to paint them as tools of Kremlin, as nazis, as threats to societies etc.

Scotland might have turned into an independent state without massive election frauds, Catalonian independence movement was gaining momentum, Syriza jumped to the seat of power in Greece and left wing Podemos was appearing as the most popular political movement in Spain. Millions of europeans were demonstrating on the streets of EU against the federalistic policies and EU. Clashes with tens of thousands of demonstartors and the police were taking place in Britain, Gerrmany, France, Spain and Greece. Europe was litterally grumpling under the feet of the EU comission and apparatus.

Trans-atlantic free trade agreement TTIP and others like it were opposed by millions of europeans, threatning the interests of the biggest international banks and businesses, of the power and influence of the Wall street and corporate America over Europe. Three million people signed the petition against TTIP alone. There were clashes on the streets between opponents of these agreements and the police across EU.

In 2014 it began to look like the business and political elite of EU and USA were loosing the control over the continent. It began to look like the people were getting too restless and opposing, too out of control in various political questions. The power of mainstreet mass media was waning and alternative sources of news began to pop up. People no longer believed the power structure. Despite the fact the americans taking more and more EU soil under their military occupation, despite the blatant propaganda churning, the europeans seemed to be ready to ditch the free trade agreements and centralization of EU powers.

In 2014 EU was planning a joint military operation with Nato to stop the illegal transportation of immigrants and refugees across the Mediterannean. Several criminal organisations had been smuggling people across the sea for decades and this so-called Mediterannean mafia was going to be stopped by a naval and air force. This was the plan in 2014. But it was scrapped and ditched for another plan was hatched up in the winter of 2014/2015.

This new plan was formulated at the highest leves of EU in total secrecy. In Finland no one ever said anything publicly but it became obvious in may 2015, after the national elections, when the interior ministery gave an order to the communes and counties to find out what resources they had for accepting up to 80 000 refugees. This was done in may 2015, some half a year before the "crisis" began.

In the late summer of 2015 someone gave the ok to all those smuggling organisations, somebody passed the word out and showed the green light, and the refugee flood began in full force. No one even tried to stop this flood. No one tried to send the people back, there were no border guards, nothing. Somebody had opened the doors.

Where were the radip deployment forces of Nato? Where were the EU crisis management troops? At home. Nobody mobilized those, because this was the plan. Germany did nothing. France did nothing. Italy did nothing. Greece did nothing. There was no alarm, no preparations, no guidance or orders to the border guards, nothing. Not a single politician nor an EU official said a word at the beginning. Not one. They just let the flood play out organically untill Hungary and some Balkan states grew impatient. And even after that, the reaction was slow and lethargic, purposely.

Sweden delivered almost 32 000 refugees into Finland in three months by train and buss, transportation provided by the swedish government, and not a single finnish official or a politician said a word. They did not comment swedish activities, they did not even mention Sweden. They still don't, even though they are almost daily in the news talking about the refugee crisis on our eastern border with Russia. More than 31 000 refugees were brought in from the west and 720 total came from the east, and our politicians do not even mention Sweden. They talk about the "threat of Russian border and refugee crisis". Why? Because this was the plan.

And worst of all: this plan was and is working. Who is talking about the TTIP anymore? Who is worried about the euro? No one. Neonazis, refugees, islamists, mass rapings, all kinds of things fill the head lines and news, the minds of the people, and no one remembers that the TTIP is progressing.

Operation "Refugee Crisis" worked much better than expected. In Finland the politicians and their friends, relatives and associates were and are earning millions by providing "services" and "housing" for the refugees. According to the official statements of finnish government officials the cost for the housing of one asylum seeker is 43e a day. In one asylum seeker center there may be 200 refugees. In this case the owner of that facility is paid 8600 euros a day by the government. That is 258 000 euros a month. That is 3 096 000 a year. For some, these refugees are very good business.

Refugee smuggling is multibillion dollar business for the organized crime but there are politicians and their associates across the EU who are making millions from them too. This is somehow completely ignored in the european mainstream media. This is a good business for some. They are litterally making millions by this "crisis".

There has been talk about the regulation of the Net, curbing the freedom of speech and demonstration in the name fight against racism. There are demands for EU military force, EU police, closer and more effective intelligence gathering, even censorship. All these things are being discussed because of this "crisis". In France there is a national state of emergency already in place because of the terrorist attacks. Who is wondering how it is possible even today for the ISIS and Daesh to move freeley to and from Syria and Irak even after the Paris attacks? No one. 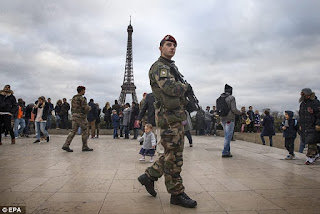 All these "security measures" are not because of terrorists or racism. They are because of us, the european citizen. The EU and USA want to control us. They were worried that the people were slipping out of control. They needed something when the scare mongering about Russia did not pan out. Something had to be done and it was this "refugee crisis".

This is part of the over all plan of removing power from the people, from the nations and memberstates to the more and more centralized EU. We are the real target of the security measures and new laws. They do not care about the refugess at all. They care about the control over us and their businesses.

Another proof about this "refugee crisis" being planned operation is this: Out of blue in Finland the politicians and leaders of the business world began to demand that these refugees must have direct access to the labour market. Unlike finns, they would not have to be qualified, they would not need all those permits and  certificates the finns must have in order to get a job. The head of the construction industry in Finland announced that they have 45 000 jobs for these people at the same time when at least 38 000 finnish construction workers are unemployed.

The same happened in Germany. The leaders of the german business world announced that these refugees should be get to work underpaid, without the benefits and agreements the german workers have. Naturally their wages would be far less than those of the german workers. In Finland one member of parliament announced that the refugees could work for 500e a month. This in the land which is most likely the most expensive in the world.

So who benefits from this "Crisis"? The federalists and EU who get more and more powers over the member states and the people. The business elite who is driving european labour costs down by using cheap labour. USA who is able to get the TTIP trough. And, naturally, organised crime, which is making billions trough the smuggling of these people to Europe. 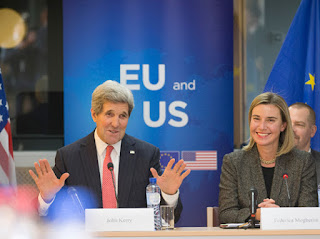 The real losers are those refugees who are stuck in the refugee camps in the conflict zones and are starving there. But who cares about them? This was never about the refugees. If it was, the peace in Syria and Irak would have been achieved years ago. 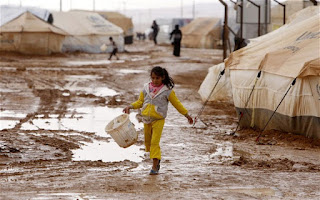