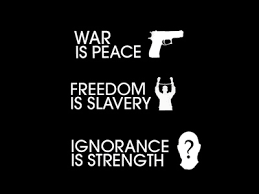 "All peoples have the right of self-determination. By virtue of that right they freely determine their political status and freely pursue their economic, social and cultural development."

That is not a talk of a red neck Klansman nor it is a statement of a Neo-Natzi ultra right wing war mongers, nor it is a declaration of the racist bigots as we are being told again and again by the mainstream media and by the most powerful leaders in the west.

United Nations, The only truly global organisation which has tried to uphold the moral and ethical principles of humankind after WW2 declared clearly and absolutely that all the peoples and nations have a right to rule themselves and decide themselves of everything concerning themselves. Period.

That is anti globalism. That is against all we are being told and have been told for the past twenty or so years by the big banksters, politicians, leaders, soroses and others. Further more, the UN has stated clearly:

Adopted at the Twenty-first Session of the Human Rights Committee, on 13 March 1984
1. In accordance with the purposes and principles of the Charter of the United Nations, article 1 of the International Covenant on Civil and Political Rights recognizes that all peoples have the right of self-determination. The right of self-determination is of particular importance because its realization is an essential condition for the effective guarantee and observance of individual human rights and for the promotion and strengthening of those rights. It is for that reason that States set forth the right of self-determination in a provision of positive law in both Covenants and placed this provision as article 1 apart from and before all of the other rights in the two Covenants.

2. Article 1 enshrines an inalienable right of all peoples as described in its paragraphs 1 and 2. By virtue of that right they freely “determine their political status and freely pursue their economic, social and cultural development”. The article imposes on all States parties corresponding obligations. This right and the corresponding obligations concerning its implementation are interrelated with other provisions of the Covenant and rules of international law.

3. Although the reporting obligations of all States parties include article 1, only some reports give detailed explanations regarding each of its paragraphs. The Committee has noted that many of them completely ignore article 1, provide inadequate information in regard to it or confine themselves to a reference to election laws. The Committee considers it highly desirable that States parties’ reports should contain information on each paragraph of article 1.

4. With regard to paragraph 1 of article 1, States parties should describe the constitutional and political processes which in practice allow the exercise of this right.

5. Paragraph 2 affirms a particular aspect of the economic content of the right of self-determination, namely the right of peoples, for their own ends, freely to “dispose of their natural wealth and resources without prejudice to any obligations arising out of international economic cooperation, based upon the principle of mutual benefit, and international law. In no case may a people be deprived of its own means of subsistence”. This right entails corresponding duties for all States and the international community. States should indicate any factors or difficulties which prevent the free disposal of their natural wealth and resources contrary to the provisions of this paragraph and to what extent that affects the enjoyment of other rights set forth in the Covenant.

6. Paragraph 3, in the Committee’s opinion, is particularly important in that it imposes specific obligations on States parties, not only in relation to their own peoples but vis-à-vis all peoples which have not been able to exercise or have been deprived of the possibility of exercising their right to self-determination. The general nature of this paragraph is confirmed by its drafting history. It stipulates that “The States parties to the present Covenant, including those having responsibility for the administration of Non-Self-Governing and Trust Territories, shall promote the realization of the right of self-determination, and shall respect that right, in conformity with the provisions of the Charter of the United Nations”. The obligations exist irrespective of whether a people entitled to self-determination depends on a State party to the Covenant or not. It follows that all States parties to the Covenant should take positive action to facilitate realization of and respect for the right of peoples to self-determination. Such positive action must be consistent with the States’ obligations under the Charter of the United Nations and under international law: in particular, States must refrain from interfering in the internal affairs of other States and thereby adversely affecting the exercise of the right to self-determination. The reports should contain information on the performance of these obligations and the measures taken to that end.

7. In connection with article 1 of the Covenant, the Committee refers to other
international instruments concerning the right of all peoples to self-determination, in particular the Declaration on Principles of International Law concerning Friendly Relations and Cooperation among States in accordance with the Charter of the United Nations, adopted by the General Assembly on 24 October 1970 (General Assembly resolution 2625 (XXV)).

8. The Committee considers that history has proved that the realization of and respect for the right of self-determination of peoples contributes to the establishment of friendly relations and cooperation between States and to strengthening international peace and understanding."

Let us repeat this one so no one can say "I did not see that":
THE COMMITEE CONSIDERS THAT HISTORY AS PROVED THAT THE REALIZATION OF AND RESPECT FOR THE RIGHT OF THE SELF-DETERMINATION OF PEOPLES CONTRIBUTES TO THE ESTABLISHMENT OF FRIENDLY RELATIONS AND COOPERATION BETWEEN STATES AND TO STRENGHTENING INTERNATIONAL PEACE AND UNDERSTANDING.

There you go. The UN has declared that it is the cooperation between INDENPENDENT peoples and nations which guarantees the peace and understanding between countries and in general. This is absolutely the opposite what the globalists have been telling and are saying to us.

INSURGENCY IN THE NORTH CAUCASUS 2009-PRESENT

CONFLICT IN THE NIGER DELTA 2004

INSURGENCY IN THE REPUBLIC OF MACEDONIA 2001

TUTSI REBELLION IN THE CONGO 1998-PRESENT

REPUBLIC OF THE CONGO CIVIL WAR 1997

ATTACKS ON COMORAN IMMIGRANTS IN MAHORE 1992

AUGUST COUP IN THE SOVIET UNION 1991

ARMY REBELLION IN THE PHILIPPINES 1990

THE OSH RIOTS IN KYRGYZSTAN, USSR 1990

Well, There you go. This is the world peace the globalists are talking about. Just look at how many conflicts are going on because the peoples right to self determination has not been granted or given. Take a look how many wars and conflicts are about the oppression of peoples. How many wars are about oil, gas, natural resources and their availability for the multinational corporations? How many wars there are because the globalist powers have seen as their right to destroy a country or nation which has opposed them?

You understand? This is the World Peace brought to you all by Globalism.

Just like George Orwell once wrote: War is Peace.