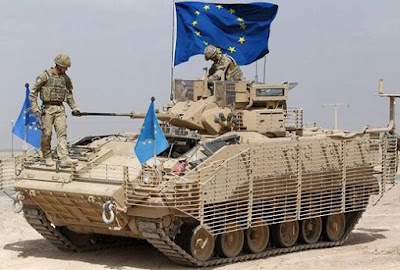 "Article 28 1. The tasks referred to in Article 27(1), in the course of which the Union may use civilian and military means, shall include joint disarmament operations, humanitarian and rescue tasks, military advice and assistance tasks, conflict prevention and peace-keeping tasks, tasks of combat forces in crisis management, including peace-making and post-conflict stabilisation. All these tasks may contribute to the fight against terrorism, including by supporting third countries in combating terrorism in their territories. 2. The Council shall adopt decisions relating to the tasks referred to in paragraph 1, defining their objectives and scope and the general conditions for their implementation. The High Representative of the Union for Foreign Affairs and Security Policy, acting under the authority of the Council and in close and constant contact with the Political and Security Committee, shall ensure coordination of the civilian and military aspects of such tasks."

The common security and defence policy 47) The following new section shall be inserted:

"SECTION 2 PROVISIONS ON THE COMMON SECURITY AND DEFENCE POLICY". 48) Article 27 shall take over the wording of Article 17, with the following amendments:

(a) the following new paragraph 1 shall be inserted and the next paragraph shall be renumbered 2: "1. The common security and defence policy shall be an integral part of the common foreign and security policy. It shall provide the Union with an operational capacity drawing on civil and military assets. The Union may use them on missions outside the Union for peace-keeping, conflict prevention and strengthening international security in accordance with the principles of the United Nations Charter. The performance of these tasks shall be undertaken using capabilities provided by the Member States."; (b) paragraph 1, renumbered 2, shall be amended as follows: (i) the first subparagraph shall be replaced by the following: "The common security and defence policy shall include the progressive framing of a common Union defence policy. This will lead to a common defence, when the European Council, acting unanimously, so decides. It shall in that case recommend to the Member States the adoption of such a decision in accordance with their respective constitutional requirements."; (ii) in the second subparagraph, the words "in accordance with this Article" shall be replaced by "in accordance with this Section"; (iii) the third subparagraph shall be deleted. (c) paragraph 2, renumbered 3, to paragraph 5 shall be replaced by the following paragraphs: "3. Member States shall make civilian and military capabilities available to the Union for the implementation of the common security and defence policy, to contribute to the objectives defined by the Council. Those Member States which together establish multinational forces may also make them available to the common security and defence policy. Member States shall undertake progressively to improve their military capabilities. The Agency in the field of defence capabilities development, research, acquisition and armaments (European Defence Agency) shall identify operational requirements, shall promote measures to satisfy those requirements, shall contribute to identifying and, where appropriate, implementing any measure needed to strengthen the industrial and technological base of the defence sector, shall participate in defining a European capabilities and armaments policy, and shall assist the Council in evaluating the improvement of military capabilities. 4. Decisions relating to the common security and defence policy, including those initiating a mission as referred to in this Article, shall be adopted by the Council acting unanimously on a proposal from the High Representative of the Union for Foreign Affairs and Security Policy or an initiative from a Member State. The High Representative may propose the use of both national resources and Union instruments, together with the Commission where appropriate. 5. The Council may entrust the execution of a task, within the Union framework, to a group of Member States in order to protect the Union's values and serve its interests. The execution of such a task shall be governed by Article 29. 6. Those Member States whose military capabilities fulfil higher criteria and which have made more binding commitments to one another in this area with a view to the most demanding missions shall establish permanent structured cooperation within the Union framework. Such cooperation shall be governed by Article 31. It shall not affect the provisions of Article 28. 7. If a Member State is the victim of armed aggression on its territory, the other Member States shall have towards it an obligation of aid and assistance by all the means in their power, in accordance with Article 51 of the United Nations Charter. This shall not prejudice the specific character of the security and defence policy of certain Member States. Commitments and cooperation in this area shall be consistent with commitments under the North Atlantic Treaty Organisation, which, for those States which are members of it, remains the foundation of their collective defence and the forum for its implementation.".

"45) Articles 27a to 27e, on enhanced cooperation, shall be replaced by Article 10 in accordance with point 22 above.

(a) paragraph 1 shall be deleted and the remaining paragraphs shall be renumbered accordingly; throughout the Article the words "budget of the European Communities" shall be replaced by "Union budget"; (b) in paragraph 2, renumbered 1, the words "which the provisions relating to the areas referred to in this Title entail" shall be replaced by "to which the implementation of this Chapter gives rise"; (c) in paragraph 3, renumbered 2, the words "the implementation of those provisions" in the first subparagraph shall be replaced by "the implementation of this Chapter" and in the second subparagraph the reference to Article 23 shall be replaced by a reference to Article 17; (d) the following new paragraph 3 shall be inserted and paragraph 4 deleted: "3. The Council shall adopt a decision establishing the specific procedures for guaranteeing rapid access to appropriations in the Union budget for urgent financing of initiatives in the framework of the common foreign and security policy, and in particular for preparatory activities for the tasks referred to in Article 27(1) and Article 28. It shall act after consulting the European Parliament. Preparatory activities for the tasks referred to in Article 27(1) and Article 28 which are not charged to the Union budget shall be financed by a start-up fund made up of Member States' contributions. The Council shall adopt by a qualified majority, on a proposal from the High Representative of the Union for Foreign Affairs and Security Policy, decisions establishing: (a) the procedures for setting up and financing the start-up fund, in particular the amounts allocated to the fund; (b) the procedures for administering the start-up fund; (c) the financial control procedures. When the task planned in accordance with Article 27(1) and Article 28 cannot be charged to the Union budget, the Council shall authorise the High Representative to use the fund. The High Representative shall report to the Council on the implementation of this remit.".

"49) The following new Articles 28 to 31 shall be inserted: ... Article 30 1. The European Defence Agency referred to in Article 27(3), subject to the authority of the Council, shall have as its task to: (a) contribute to identifying the Member States' military capability objectives and evaluating observance of the capability commitments given by the Member States; (b) promote harmonisation of operational needs and adoption of effective, compatible procurement methods; (c) propose multilateral projects to fulfil the objectives in terms of military capabilities, ensure coordination of the programmes implemented by the Member States and management of specific cooperation programmes; (d) support defence technology research, and coordinate and plan joint research activities and the study of technical solutions meeting future operational needs; (e) contribute to identifying and, if necessary, implementing any useful measure for strengthening the industrial and technological base of the defence sector and for improving the effectiveness of military expenditure. 2. The European Defence Agency shall be open to all Member States wishing to be part of it. The Council, acting by a qualified majority, shall adopt a decision defining the Agency's statute, seat and operational rules. That decision should take account of the level of effective participation in the Agency's activities. Specific groups shall be set up within the Agency bringing together Member States engaged in joint projects. The Agency shall carry out its tasks in liaison with the Commission where necessary." 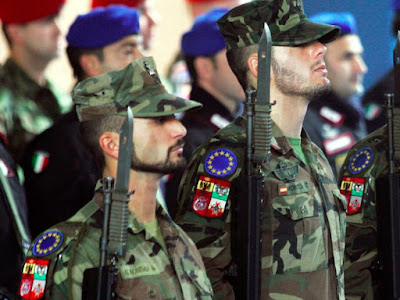 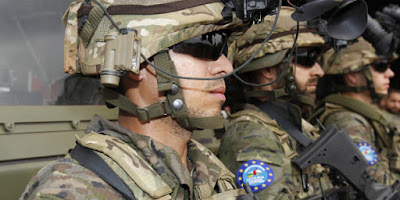 Samassa artikkelissa lainataan Ranskan presidentti Macronia:
"A week ago Macron said on French radio that Europe needed to work together to protect itself against "attempted attacks in cyberspace" from China, Russia "and even the United States of America"."

" ..even the United States of America" 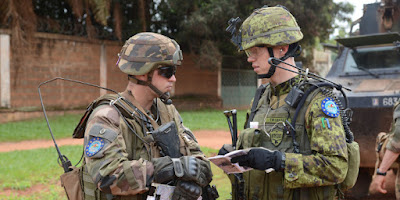 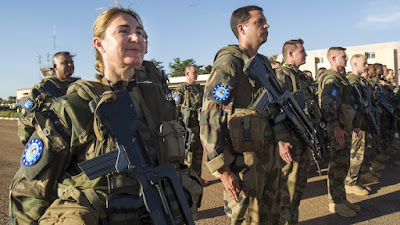 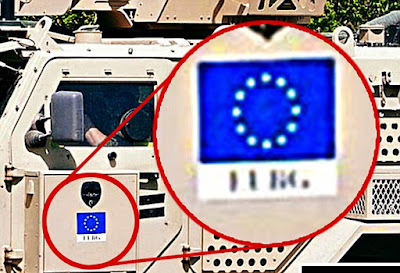 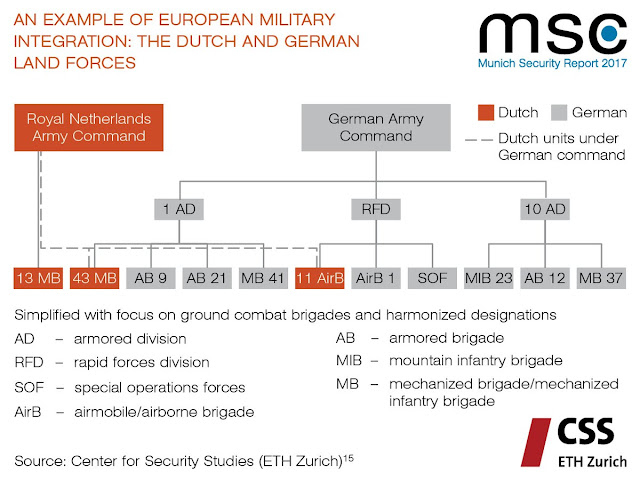 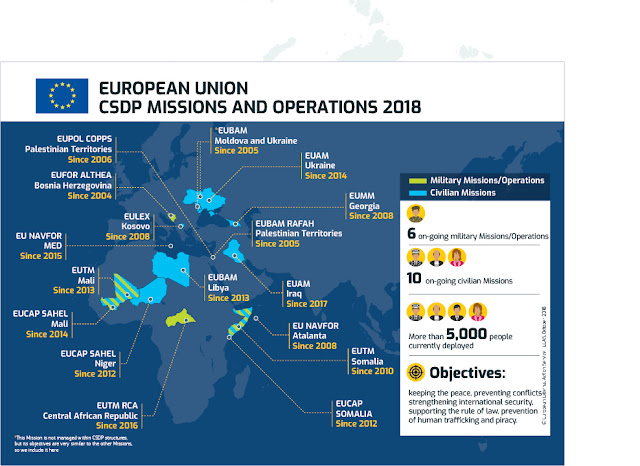 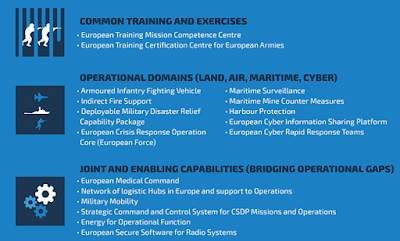 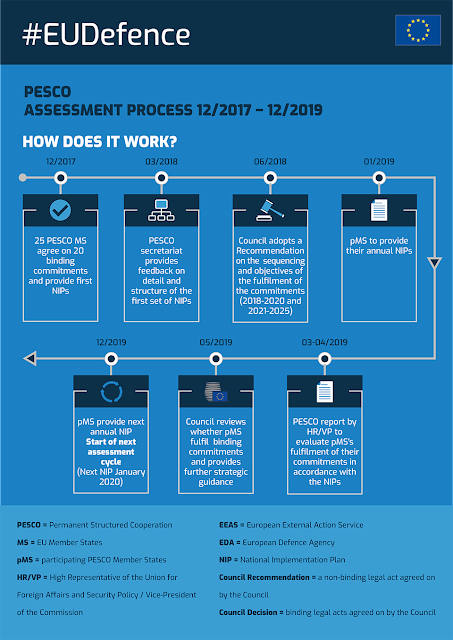